ATMs allow you to carry out a variety of money transactions with your card account. These devices are gaining more and more popularity in the world, so today there is a need to protect ATMs from fraud.

Each person has a unique facial structure. Facial recognition technology allows automatic identification of the ATM user. In this article we will tell you about the features of this technology. You will learn about the principle of its operation, advantages and disadvantages.

What are face recognition systems

In the 21st century, biometric authentication is an integral part of everyday life. For ATMs, facial recognition technology is a convenient and practical feature of identification without a password.

The world’s first ATM with facial recognition was introduced in 2015.

The algorithm for facial recognition technology consists of two steps:

Facial biometrics involves scanning with special points to create a map. This map is converted into a unique representation associated with the identity of a particular user. This process includes an identification stage, followed by an ATM cash, check, placement of money trays and selection of bills for the customer.

The introduction of facial recognition technology in ATMs helps speed up transactions and eliminate card misuse.

The biometric face identification system is easily integrated into the normal ATM software. Every bank can adjust this procedure to its own needs.

Stages of the facial recognition system

This step involves highlighting the person’s face in the image.

Important: The recognition algorithm and calculating facial characteristics is constantly being improved. Previously, the main point for the algorithms was the eyes. Currently, the algorithms take into account a minimum of 68 points on the face. The contour of the face, the shape of the chin, eyes, nose and mouth, as well as the distance between them are taken into account.

Descriptor computation makes it possible to identify features characteristic of a face regardless of the user’s age, hairstyle, makeup, or other factors. Comparison of different descriptors allows one to evaluate whether the two obtained face images refer to the same person.

In the end, the resulting digital template is compared with the available faces in the database.

Many industries now see great promise in the application of facial recognition technology. Facial biometric identification is one of the current tools for information security around the world.

Facial recognition is now a particularly active addition to the ranks of biometric technologies such as voice authorization or fingerprint scanning.

Reflecting on the accuracy of facial recognition, experts at The Security Industry Association note that the market for biometric technology is global and competitive. That’s why vendors are constantly working to provide technology that is as effective and accurate as possible for all types of uses, applications and demographics.

Important: Biometric information was first used by the police in various countries. At the beginning of the 20th century, in Great Britain, criminals were identified by fingerprints.

Like Face ID, fingerprint authentication is the fast and convenient method of identifications. In this case, the authorized user has access to a list of certain functions of the device. ATMs that support fingerprint recognition allow to identify with the system, withdraw cash, and use other functions.

Face and fingerprint recognition are methods that have obvious advantages: physical operative connection to the user, simplicity and speed of use.

The main disadvantage of fingerprint recognition is that fingerprints can be faked. In addition, if the fingerprint pattern is cut or damaged, the system may not recognize it. Some fingerprints may be difficult to distinguish if the user has been engaged in manual labor for several years.

Iris recognition, as compared to face recognition, is more sensitive. For this technology to work correctly, the user must stand motionless and as close as possible to the equipment. In this case, some users may experience eye discomfort.

How does facial recognition work at ATMs

ATMs with the facial recognition help avoid fraud and increase security in banking. All modern face recognition technologies use systems that are trained using test images. Bases with images containing faces and non-face images are used for training. Each image fragment is characterized as a feature vector. The feature vector allows to determine whether a given part of the image is a face or not. 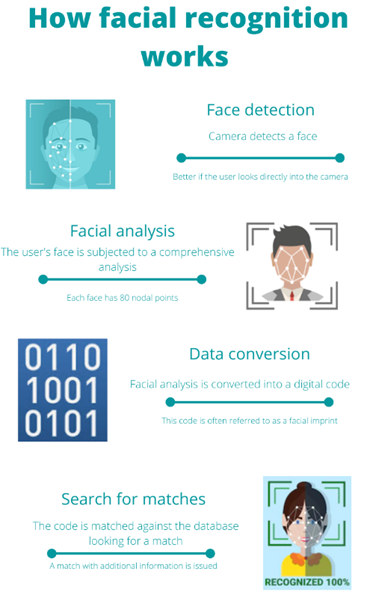 Important: Nodal points include the distance between users’ eyes, the shape of their cheekbones, and other features.

The main advantages of facial recognition are: ease of use, security, contactless, speed, convenience, identification reliability and scalability. In addition, the advantage of face recognition compared to other biometric identification systems is that cameras can capture images from a distance.

Facial recognition technology helps investigate various ATM security incidents. The presence of a face on a camera helps search for facial matches based on that image from multiple camera recordings.

One of the biggest challenges for banks is considered to be tracking criminals who install skimmers. Skimmers are devices that criminals attach to ATMs to read card data. The bank’s transmission of an image of a potential criminal helps identify the criminal.

In addition, system operators can create a digital watch list based on license plate recognition if the ATM video camera is configured to capture images of license plates of vehicles that pass by the ATM.

To prevent theft and other criminal activity, it is important to identify potential perpetrators. For example, a robber might linger near an ATM, wait for a citizen to withdraw money, and then commit the robbery.

ATMs with facial recognition technology can analyze video footage of the theft incident, including the suspects’ faces. Banks can then store a digital image of the face. In this case, if a person with a similar face appears in the camera’s field of view, security will be notified in real-time and can respond promptly.

Banks can save time by using facial recognition to alert them to potential suspects and speed up forensic analysis when investigating incidents.

Face recognition systems can cause identification errors. For example, if there are flaws in the image used to create the face image, the system will not be able to match it to another in the face recognition database. Low resolution and strong shadows can distort the final facial print and cause false positives.

In addition, face recognition may be ineffective if a relative of the cardholder, with his/her permission, wants to use the ATM. 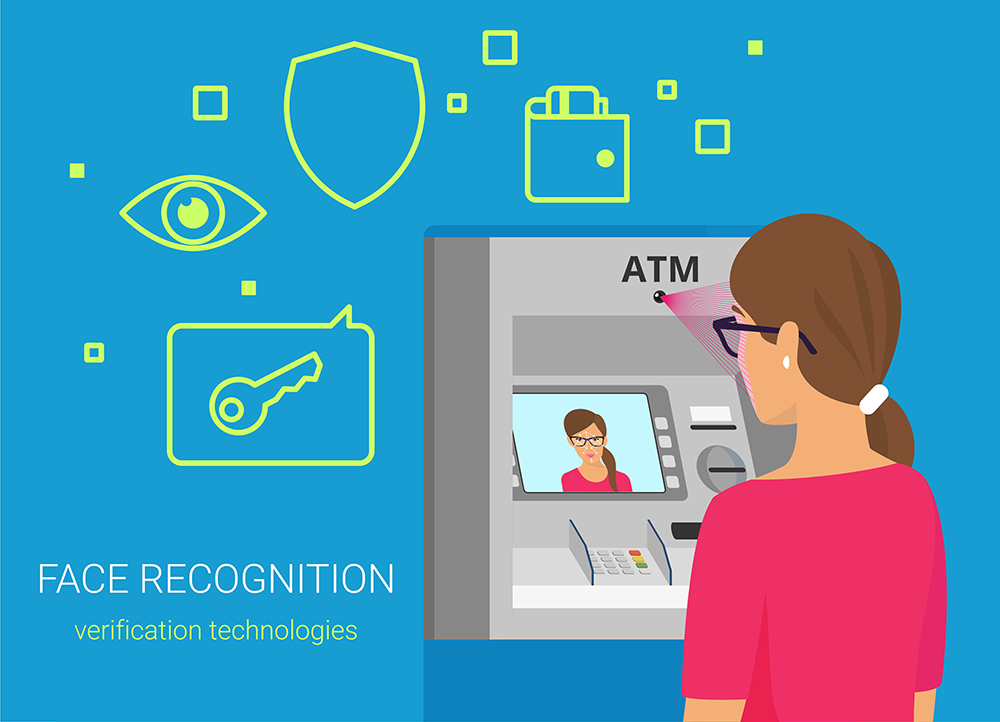 Biometric identification allows to speed up service, make personalized offers and fight against fraudsters. The use of facial recognition technology allows customers to withdraw cash from ATMs using a PIN code without using a card, as well as perform other banking operations. 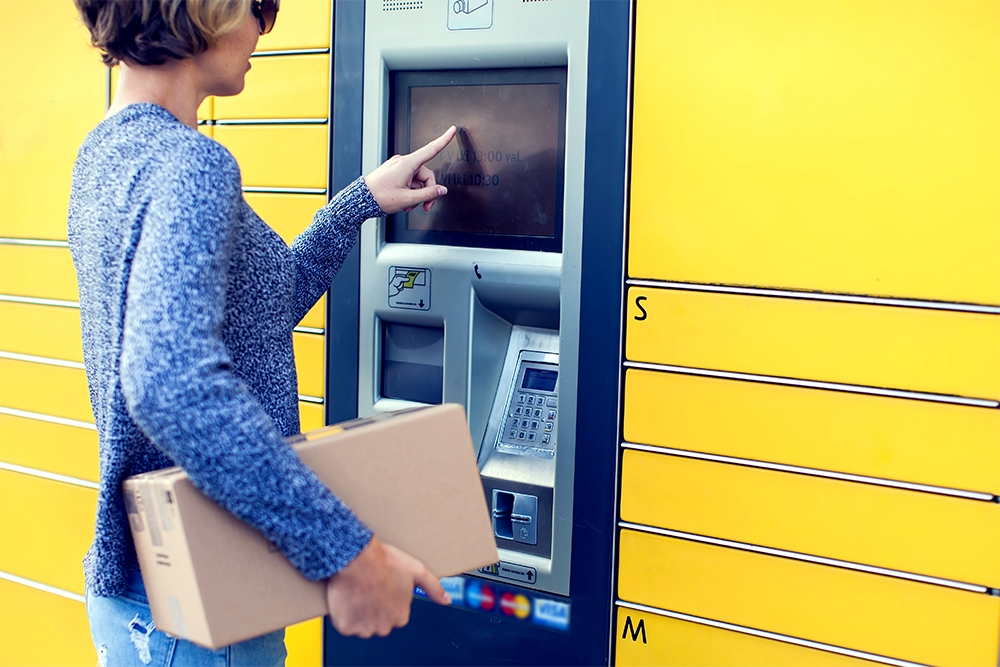 The ATMeye.iQ software solution features facial recognition and is designed to protect self-service devices. The software can be used to provide protection against vandalism, robbery and fraud.

The software is equipped with special sensors: camera closure recognition, triggering, antiskimmer, gas, tilt and shock. ATMeye.iQ has been in demand on the market for 20 years and is used in 80 countries to simplify security and support services.

Cameras that allow various transactions through facial recognition are not only found in modern banks, but also in stores and restaurants. The biometric market is expected to grow rapidly in the coming years, reaching a size of 68.6 billion U.S. dollars by 2025.

Many banks and financial institutions around the world have already implemented face recognition ATMs, and customers are taking advantage of biometric technology to protect their money.

Below you will find answers to several questions about ATM facial recognition technology.

What is difference between face detection and face recognition?

Do all ATMs have face recognition?

No. Not all ATMs are equipped with facial recognition, the technology is considered advanced.

How does CCTV face recognition work?

The principle of face recognition is simple, regardless of the selected algorithm: the system receives the scanned image of a person's face and compares it with reference pictures that are already stored in the biometric database. At the same time changes in appearance feature (beard, glasses, haircut, etc.) are taken into account.

What is biometric ATM?

A biometric ATM is a device that performs various operations based on biometric identification of the account holder. Inside such an ATM there is a sensor device that reads the unique data of a person. Biometrics increases the convenience of service, as you no longer have to look for your card or smartphone to perform transactions. Important: By 2027, face-recognition ATMs are expected to increase at various financial institutions across Europe, according to projections.

Why is facial recognition controversial?

One of the complexities of facial recognition is that as the technology gets more accurate, there are concerns that it will be used for mass surveillance. There are fears that in the future this technology will detect facial expressions and this will lead to real-time surveillance.

Can face recognition be fooled?

Yes. For example, experts from McAfee circumvented facial recognition verification technology with artificial intelligence. The goal of this study was to show that reliance on automated systems can give attackers the ability to bypass passport identification.

All You Need to Know About ATM Skimming Devices

The number of ATMs and payment terminals in the world is growing rapidly. The global ATM market…